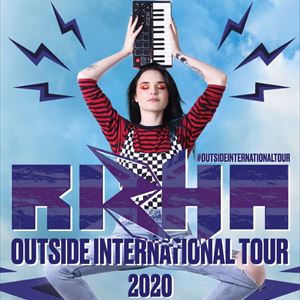 RIZHA, called by MTV as "The exquisite rarity of underground music.", Rizha has one of those incredible musical talents that sprout at an early age and evolve at a dizzying pace.With 6 years he already showed his skill with the guitar, and with only 8 he already composed his own songs in English.

At 12 she signed with Universal Music Publishing and her career began to grow.After working with several famous producers of the Spanish and international scene, she decided that her first album would be carried out by herself.

At 16 she recorded her first LP FINALLY, written, composed, recorded, produced and mastered by herself. It was released on January 31, 2017.

In August 2018, he shot in London his first film with Elle Fanning directed by Max Minghella and produced by Fred Berger (La la land) film entitled "Teen Spirits" DAfter wiping out the World Pride Madrid 2017 before more than 70,000 people, Rizha displayed her magic in an intimate and interactive concert at the Hard Rock Café in Madrid, presenting her debut album FINALLY, where the sold out poster hung up again, something very habitual in his concerts.

The show presented by Rizha is somewhat hypnotic, alternative and unique. Since 2017, Rizha is in full tour (Finally On World Tour) that will end in December of this year (2018). The very young artist will travel 14 countries, including Japan, Italy, Germany, England or the United States.