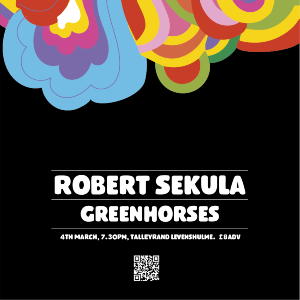 Robert Sekula was the singer/songwriter of
14
Iced Bears, who came out of the C86 wave with the support of legendary DJ John Peel, and developed a more psychedelic sound for their two studio albums the late 80s/early 90s. They became a formative influence on many of the indie bands, especially from the US, in later decades. After reforming in 2010, they toured the US twice and Cherry Red brought out the comprehensive compilation, Hold on Inside.

Currently, Rob is playing a mix of Bears and his more recent solo songs, such as the singles Pamela and Not Santa Claus (Sno-fi Mix).
https://youtu.be/C_ldh1z271g
https://youtu.be/TP4fi_RDqgE
---------------
Greenhorses
Greenhorses, a new 6-piece Americana band from North West England. Sunshine Americana and road-worn roots - Greenhorses were formed from what started out as West on Colfax but after various line-up changes and the addition of more harmonies, it became a whole different thing - which has prompted a change in name and direction. Come ride with Greenhorses.
---------------