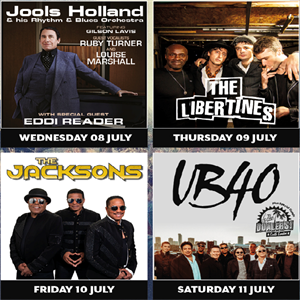 The Libertines
UB40
Jools Holland & His Rhythm & Blues Orchestra
The Jacksons
The Dualers
All Rochester Castle Concerts performances
Have tickets to sell? – Find out more

Rochester Castle stands on the east bank of the River Medway in Rochester, Kent. The beautiful 12th-century tower is one of the best preserved in England. Rochester served as a strategically important royal castle. During the late medieval period it helped protect England's South-East coast from invasion.

Set in stunning gardens, the English Heritage property will be once again opening it’s doors to an entirely different kind of invasion this Summer. Hundreds of delighted music lovers, are set to invade the pretty cathedral town of Rochester, for a series of four concerts 8/9/10/11 July with some of the UK and Americas biggest names performing in the castle grounds.

AGMP are pleased to present Jools Holland, The Libertines, The Jacksons and UB40 + special guests The Dualers with supporting acts to be announced at this years castle events.

Doors open at 4pm-11pm on Wednesday, Thursday and Friday and from Midday-11pm on Saturday.