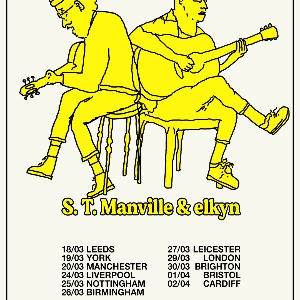 This sincerity is matched in the music. While the arrangements on ‘holy spirit social club’ are far more expansive than those heard on 2020 EP ‘beech’, tender finger picks and elkyn’s distinctive half-whisper still remain at its heart. Though the pain is palpable, its impact is meditative, enveloping the listener in a safe haven where you feel free to acknowledge the darker parts of yourself.

This unflinching honesty has seen elkyn become a streaming success in recent months, with the one-off singles that followed ‘beech’ making it on to a number of Spotify editorial playlists. After a lockdown spent demoing, he entered Nave Studios with Producer Mark Gustafson, creating more complete songs than ever before. The process was so cathartic for Donnelly that he went on to name the album after the social club that once existed in the basement below the aforementioned studio.

“elkyn’s uniquely visceral and vulnerable performances have a special way of packing emotion into small and vast spaces”, Atwood Magazine

“Music that fans of Elliott Smith or Villagers would fall for, Joseph Donnelly’s willingness to leave himself open means his songs connect right with the heart”, Secret Meeting

“elkyn seems to be pushing far beyond the cliches of what a singer-songwriter and acoustic guitar are capable of”, For The Rabbits

S.T. Manville is a singer-songwriter from the Midlands UK. He has written and produced for artists such as Burna Boy, Mabel, Mø, and Jaykae to name a few.

After some time away from the music industry he returned in 2019 with his most personal musical offerings, released under his own name. Since then, Manville has clocked up over 3 million streams, been supported by BBC Radio 1, BBC 6 Music, BBC Introducing, DIY Mag, i-d Magazine, Kerrang! and more, performed at Dot to Dot and Handmade Festival as well as supported Frank Turner.

This year Manville has released sublime single Stalemate and played shows throughout September with the likes of Willy Tea Taylor, winning new fans everywhere he goes with his honest, open table approach to performing and heart warming lyrics.

With a new EP, and a tour with OWEN scheduled for late 2021, Manville continues to make a name for himself as one of the most promising new singer-songwriters in the UK.