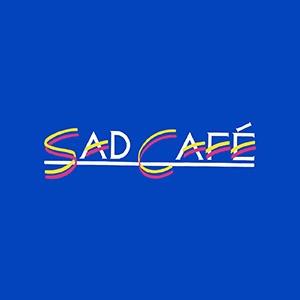 We are really excited to welcome Sad Cafe to Chester's most iconic live music venue, Alexander's. Doors is 7:30pm and the event will be ticket only. Please book your tickets early to avoid disappointment. The band will take to the stage at approximately 9pm and will be playing all the hits including ‘Every Day Hurts’, ‘My Oh My’, ‘Strange Little Girl’ and many more.

Regarded by many as one of the best live bands of the 80s, Sad Café are back!

Original members Ian Wilson and bassist Des Tong were joined by long-time associate, singer/songwriter Sue Quin for their first comeback tour in 2012. The present line-up includes the exciting vocal talent of Barry James Thomas and lead guitarist Dave Day along with multi-instrumentalist
Neil Shaw-Hulme, keyboard player Matt Steele and drummer Bryan Hargreaves to once again perform their catalogue of great songs including the unforgettable
Every Day Hurts
(UK No.3),
My Oh My
(UK No.14 – both from their Top Ten album, ‘Facades’ – produced by Eric Stewart of 10cc), Strange Little Girl
(UK No.32) and many more.

The band also had
two US Billboard Hot 100
hits with ‘Run Home Girl’ and ‘La-Di-Da’.

Ian Wilson has been the heart and soul of every Sad Café line-up since their inception in 1977. His unique vocal sound and arrangements were paramount in the signature of the band and the close harmony between Ian and the late Paul Young was legendary in creating the sound that was Sad Café.

Des Tong joined Sad Café after the retirement of their original bassist in time for the 1981 ‘Ole’ album. Part of the elite team of session players in Manchester from the 1980s, he worked with Ian and Sue on a regular basis. He remained with the band through to their 1989 ‘Whatever it Takes’ album, and up to the present day.

Sue Quin met the band in 1980 and worked with Ian and Des consistently as part of the Manchester session scene and many times with Paul Young. She recorded backing vocals on Keep Us Together and wrote “Heart” (Politics of Existence). She was invited to join Cafe for Paul Young’s memorial concert at the Apollo and in 2012 joined the band for their relaunch tour.

Neil Shaw Hulme, plays clarinet, saxophones, flute, WX7, guitar, keyboards and sings. He first met Sue in 1983 and then Barry and Des in 1987 through working in Dougie James’s Soul Train where he also got to know Lenni Sax. Neil has worked with various members of Café over the years and joined the band in 2018.

Barry James started playing with his brother’s band ‘Dougie James Soul Train’ at the age of 18, a band which regularly featured Des Tong, Ian Wilson, Lenni Sachs and also drummer Paul Burgess from 10CC. Through Dougie he got to know Paul Young well and always wanted to be in the band and auditioned for the band when Ashley left but was only 18 at the time. With his inimitable personality and vocal style, reminiscent of Paul’s, he joined Café in 2019

Dave Day Guitar player, singer and songwriter has been working professionally since he was 19, playing with a host of contemporary pop artists including Amy Winehouse, Level 42 and Mick Jones from the Clash. He joined the Tony Christie band with Matt Steele and is currently working with Leo Sayer. Dave joined Café in 2018

Bryan Hargreaves- Drums, has worked with a variety of legendary music artists including The Temptations, Patti Austin, Kiki Dee, Billy Ocean, Paul Carrack, Glen Campbell and Don McClean to name a few. He worked with Sue in the Snake Davis band ‘The Suspicions’ for many years. He had always expressed a real interest in playing in Cafe and when Dave Irving retired in 2019, Bryan joined the band.

Matt Steele – keys, has been playing, recording and touring with the Brand New Heavies for several years and Manchester band A Certain Ratio. He met Dave Day when they were both working for Tony Christie and it was Dave who invited Matt to meet the band at the Cinnamon club and he joined Café in 2019.

Always boasting the very best of musicians from the very start, trivia fans might care to note that the band has featured many of the UK’s leading musicians over its lifetime as guests, including – Phil Lanzon (Uriah Heep, Sweet, Grand Prix); Jeff Seopardie (Maggie Bell, Chris Rea, Barbra Dickson, Paul Carrack, Gary Holton);

Please note start time and line up subject to change.

Regarded by many as one of the best live bands of the 80s,
Sad Café are back.
Original members Ian Wilson and bassist Des Tong are joined
by long time associate, singer/songwriter Sue Quin, the
exciting vocal talent of Barry James Thomas and lead guitarist
Dave Day along with multi-instrumentalist Neil Shaw-Hulme,
keyboard player Matt Steele and drummer Bryan Hargreaves to
once again perform their catalogue of great songs including the
unforgettable Every Day Hurts, My Oh My, Strange Little Girl
and many more.