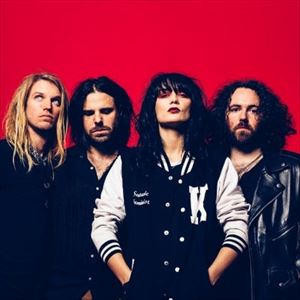 All Saint Agnes performances
With support from CLT DRP and Bloodhounds.

What do you do when your band is flying high and playing the best shows you’ve ever done, only for the country to go lockdown? That’s the situation that Saint Agnes found themselves in, after an incredible year following the release of their impressive debut Welcome To Silvertown in 2019. Endless touring and festivals culminated in opening for Monster Magnet on tour at the beginning of 2020, a Valentine’s show with Ho99o9, all topped off by selling out a solo show at The Black Heart in less than 15 minutes. No mean feat for a DIY band, but it comes as no surprise when they’ve enthralled audiences around the world with feral live performances and a vitriol that you want more of.

Many of us spent lockdown baking banana bread and attempting sourdough loaves, but Saint Agnes kept themselves busy in the only way they know how – making music. There are a lot of cliches about diamonds being made under pressure, but the risk of going stir-crazy after not leaving the house for a few months meant that risks were taken, and new sounds were found. It resulted in the creation of The Quarantine Diaries - a twisted collection of cover songs with accompanying vignette-videos filmed on an iphone in their east london flat - and the upcoming mini album, Vampire.

“Having this structure of trying to do a cover a week with a video, it kept us sane” recalls Jon James Tufnell. “We were creating stuff with the tools that were available, and as a band that's always been our philosophy, we're never going to fake something. We won't write a song that needs an orchestra, as we don't have one! We use the tools that are there, we use the equipment that we've got, we find that inspiring.” Frontwoman Kitty A. Austen agrees: “Jon and I were locked up together with our computer, so it forced us to write new music with no outside input at all, no playing ideas with the band, no audience reactions to shape things. It’s definitely created a more succinct, more punchy sound. We get to the point quicker – but we’re just as disgusting and in your face” laughs Kitty.