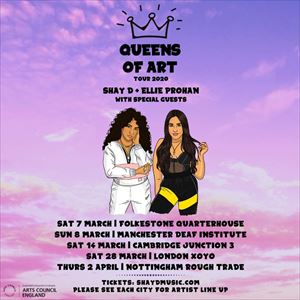 All Queens of Art performances
Have tickets to sell? – Find out more

Fan-to-Fan Resale Tickets
Shay D, known for high energy performances to crowd participation, is back to bring a range of moods to this long awaited London show!
2019 has witnessed the release of a powerful and energetic album; ‘HUMAN WRITES' alongside a historical all female hip hop tour 'Queens of Art' curated by Shay D, making prme time news. This antcipated headline show will celebrate all the music so far and present some new supercharged music from Rap to Grime, unpacking a range of profound themes from female empowerment, community, creativity to hope and the flight to succeed.
Shay D has an all female line up with DJs including Ellie Prohan, who has been smashing her sets internationally and wordsmiths such as Lioness, who has established herself as a hard hitting lyricist and powerful performer in the scene. RoxXxan has been smashing the music scene and a top model, will be doing a set so expect hard hitting fire! Shayna Marie from Capital Xtra breakfast show will be warming up for the night!!
Special guests will be added and Shay D will be bringing out guest MCs on her set! Expect hip hop, rnb, grime and rap through the night.
Cementing herself as one of the most exciting women to fly out of the UK, the passionate artist consistently grinds to perfect her artform and connect with audiences with ambitions to pave a way for others and spread hope through music.