Small Fakers + Who's Who 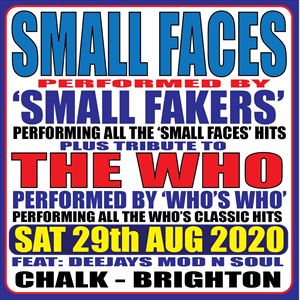 Small Fakers
Who's Who
All Small Fakers + Who's Who performances
Have tickets to sell? – Find out more

Fan-to-Fan Resale Tickets
Black Rabbit Productions Proudly Presents!
Brighton's August Mod Bank Holiday Featuring:
The Small Fakers & Who's Who
SMALL FAKERS:
Today, The Small Fakers are established in the Premiership of tribute acts. They have built a terrific international reputation for themselves as the ONLY Small Faces tribute band in the WORLD, and have played to sell-out audiences in Italy, Spain, Switzerland and the Republic of Ireland, and all over the UK. They have played the Isle of Wight festival four times since forming, and in 2008, the day after headlining the festival with his fellow Sex Pistols, bass player Glen Matlock joined The Fakers onstage to perform what many people regard at the Small Faces’ ultimate track, their 1966 number one ‘All Or Nothing’.
In 2011, the band took the #1 Album 'OGDENS NUT GONE FLAKE' out on the road, something the Small Faces never managed themselves, for a 16-date tour of the UK. The narration for the tour was provided by Stanley Unwin's son John, who appeared either on stage with the band or on a video backdrop, alongside projected psychedelic video imagery fitting to the story of the album.
The band have also performed with original Small Face Jimmy Winston, who claimed the Fakers were 'much better live than the Small Faces were.' and original drummer Kenney Jones - who also played with Rod Stewart and The Faces and The Who - when he joined the band for a rendition of 'All or Nothing' at Hurtwood Park Polo Club in 2012. He also praised the Small Fakers as being 'Really great, absolutely spot on.' Children, siblings and parents of the original band members have declared themselves Fakers fans too, with Ronnie Lane's older brother Stan even claiming: 'For those who never saw The Small Faces live, The Fakers are as close as you're gonna get.'
With endorsees like this, it's no wonder that The Fakers' trajectory is still very much on the rise, with bookings coming thick and fast, and venues and audiences getting bigger and bigger. This year is set to be their most exciting year yet, with a host of new Small Faces-related ventures guaranteed to raise their profile even more and win thousands of new fans.
If you want a piece of the action - get in touch. You WILL NOT be disappointed.
Matt - Guitar and vocals as Steve Marriott
Neil - Bass and vocals as Ronnie Lane
Jon - Organ, piano and vocals as Ian MacLagan
Dan - Drums and vocals as Kenney Jones
WHO'S WHO
Widely recognised and respected by their musical peers and acknowledged by members of The Who and those close to the band, as the group that most interprets the songs of Pete Townshend and the legendary live performances of The Who with honesty and integrity. Giving nothing less than 100% during a performance, Who’s Who ensure that a night to remember is guaranteed for those people who are lucky enough to be able to attend.
Fans of the band include Simon Townshend, Doug Sandom (The Detours), Peter “Dougal” Butler (Keith Moons’ right hand man), John Schollar (Beachcombers), Alison Entwistle and the Moon Family.
Singer Gary, has been personally praised by Pete Townshend and he also played with Roger and the late John Entwhistle at The Who Convention in Shepherds Bush in 1995.
The Keith Moon Blue Plaque Reception at The Grosvenor Hotel in Mayfair, London in 2009, saw Zak Starkey watch the entire set, completely transfixed by the incredible authenticity and timing of bass player Terry Wyatt, prompting Zak to single him out for the kind of praise that only members of a rhythm section can truly understand; but coming from the son of Beatle, all the more memorable.
Drummer Paul “Moonie” Kemp bears an uncanny resemblance to the late great Keith Moon and prides himself on complete authenticity when drumming styles and kit specification is concerned. The kit(s) he plays are completely identical to the original spec, all the way down to the nuts and bolts that hold it together and represent a labour of love with regard to sourcing and application. He’s very close to the Moon family and is a familiar visitor for the odd cup of tea at Kit’s house. A complete “one off” on the live circuit, his explosive application to the style of Keith Moon, has to be seen to be believed; there is no need to “close your eyes” with him!
No one could replace The Who, but Who’s Who’s collective interpretation of the original sound and feel, is widely regarded as the best (and closest) that anyone will ever get to evoke the feeling and energy and essence of The Who at their peak!
Between the members of the band, they have three International Who Conventions under their belt, including the first ever airing to an audience of Quadrophenia at the 2006 event, which led Simon Townshend to declare, “What an absolutely brilliant band Who’s Who are!” They have performed both Tommy and Quadrophenia, to audiences in the UK and Europe, amid critical acclaim and have now racked up numerous appearances at the Isle of Wight Festival.
With the raw power, passion and soul of the members that make up Who’s Who, these guys deliver far more than your average “run of the mill” band. As history rolls on; they have proven to become an essential ingredient to fans of The Who and their legacy, highlighting a void between the, "Then", and the, "Now", illustrating the rich legacy that The Who have left their fans and the world to savour.
It's going to be a fantastic night of the music of the Small Faces and The Who!