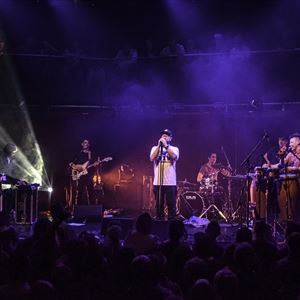 All Smoove & Turrell performances
Have tickets to sell? – Find out more

The story of Smoove & Turrell began in the post-millennium North East of England with a group of working-class lads and a shared passion for soul. Smoove had met keyboardist Mike Porter through the local music scene in Newcastle and recruited him for his ‘Smoove Live’ project for the label Acid Jazz. Around Mike’s house one day they overheard a neighbour singing sublime melodies in his garage with friends which turned out to be none other than a young John Turrell practicing in a band called ‘The Stevies’. After a couple of further sessions ‘scouting’ him they finally knocked on the door and had a chat and hit it off straight away.

A man of many facets, John Turrell was a skilled carpenter, working and teaching the trade to apprentices at a local college as well as his musical endeavours. After the trio performed several gigs together with various other guest musicians it was agreed they would create some new material and so they started to write and arrange a clutch of tracks that Smoove would record and produce.