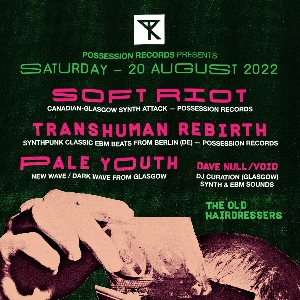 Possession Records presents a showcase — the first in a few years — with the recent release of Preparing Singularity by Transhuman Rebirth!

Our own experimental, mutant auteur synthpop artist here on Possession. Soft Riot is JJD, a Glasgow-based Canadian who has over the last number of years released six albums and has toured off to locations locations all over Europe and parts of North America. This is one of the only remaining local shows for the rest of 2022 so come check it out!

Having released a debut album on Possession recently called Preparing Singularity, Transhuman Rebirth — a new project by Berlin-based Ben Bloodygrave — brings his brand of classic yet futuristic sounding synthpunk-EBM to Glasgow for the first time.

(DJ)
Running for around five years now, NULL/VOID is an industrial, techno, EBM, synth night that runs semi-regularly here in the city with frequent guest acts including past performances by Qual, PC World, Scottish Power and more.