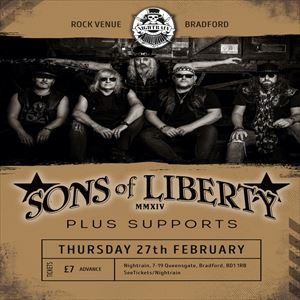 Sons of Liberty
All Sons Of Liberty performances
Have tickets to sell? – Find out more

Rocking stages since 2014 Sons of Liberty are a high energy original Southern Rock Band from Bristol and South Wales.  The band were drawn together by their shared love of the incredible music of the Southern States of America....and our desire to share this with the people of the UK.  An energetic band who deliver an authentic show based on professional musical ability.

The idea for the band started on a road trip to go and buy a used guitar...... Andy and Fred were listening to southern rock music in the van.  'Why the hell is nobody playing this stuff....we gotta put a band together and do this"....the rest is history!  The guitar duo knew who they needed as a front man...former Mick Underwood's Glory Road vocalist Rob Cooksley.  The Rhythm section of Drummer Steve Byrne and Bassist Mark Thomas were the next obvious choices. As soon as we told them what we were doing we got a resounding Hell Yeah!  The result is a band of people who love the music, know how to play and know how to put on a rocking show.

The band released the follow up 'Aged in Oak' in September 2018 and it's kind of gone ballistic for us ever since!

The Band is gigging regularly across the UK.  Their performance at Giants of Rock 2019 secured them a prestigious main stage slot for Giants of Rock 2020.  2020 sees the band at some great festivals and exciting shows including Breaking Bands, SOS, Rockin The Bowl and RockForce.