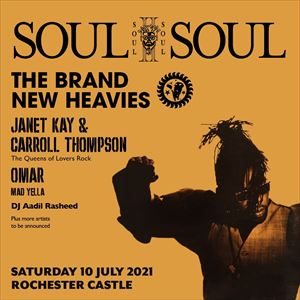 Soul II Soul have been making people dance worldwide for over 30 years from their early warehouse and Africa Centre parties through to festival and arena performances all celebrating the full live sound system experience.

With 2 Grammy's, album-sales well in excess of 10 million and seminal tracks Back To Life and Keep On Movin' ensuring their household name status the band has been honoured by being granted the keys to no less than seven US cities and most recently in 2020 with a plaque unveiled on the Music Walk of Fame in their spiritual home of Camden, North London.

The Brand New Heavies are pioneers of the London Acid Jazz scene, The Brand New Heavies, have been responsible for some of the UK’s biggest R&B / Soul tracks, scoring sixteen top 40 singles including Dream On Dreamer, Never Stop, Dream Come True, Midnight at the Oasis', Brother Sister, You are the Universe, Sometimes, Stay This Way and You’ve Got A Friend, as well as over two million album sales.

Janet Kay & Carroll Thompson are widely acknowledged as 'The Queens of Lovers Rock'. Janet Kay is best known for the Dennis Bovell produced track Silly Games which in 1979 went to #2 in the UK charts. Carroll Thompson first found fame with the Reggae Smash I'm So Sorry and had a slew of hits such as Hopelessly In Love, Make It With You, Love Won't Let Us Wait and I'm Still Waiting.

British Soul legend Omar has been making essential music for over 30 years. since the release of his 1991 classic debut single There's Nothing Like This. Stevie Wonder said of him "When I Grow Up I Wanna Be Like Omar". Omar has worked with Erykah Badu, Robert Glasper, Leon Ware, Angie Stone, DJ Jazzy Jeff, Mica Paris, Ty, Lalo Schifrin, Syreeta Wright, Steviw Wonder and more.

Snowboy & The Latin Section are Europe's leading Afro-Cuban Jazz group led by multi-percussionist Mark 'Snowboy' Cotgrove. Snowboy has performed with Mark Ronson, Amy Winehouse, Imelda May, Simply Red, JTQ, Incognito and has been a constant member of the Lisa Stansfield group since the 1980's.

Mad Yella are a Kent based Jazz-Funk / Neo-Soul group who are creating ripples in the UK soul scene being playlisted on both Mi-Soul & Crackers Radio.

Your host and DJ for the day will be Kent's £1 soul DJ Aadil Rasheed.

Age Restriction is 11+. All under 18s must attend with an adult.

All tickets bought for the 2020 series remain valid for the new 2021 dates, which have been moved back one year due to the COVID-19 pandemic.