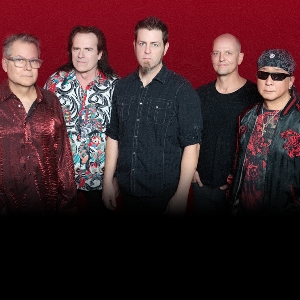 Spock's Beard are a band who are in a continual state of evolution, as is always the case with genuinely creative musicians. And their new album, 'Noise Floor', fits perfectly into this process.

“We are always about evolution, not revolution. But what we have done this time is make the songs more melodic,” believes vocalist/guitarist Ted Leonard.
“We still love our crazy prog, but now appreciate how important it is to grab people's attention early on.”
“A lot of our songs on the previous album (2015’s 'The Oblivion Particle') took a little time to make an impact on people,” adds keyboard player Ryo Okumoto.
“You had to really listen to them. But this time around, we have crafted music that is more immediate.”

As with all Spock's Beard songs, most of the new album was written by the individual members, and then brought to the rest of the band as high quality demos.
“We all do this type of thing in our home studios,” adds Leonard. “So, by the time they reach the stage where the entire band get to judge them, they are really developed, and therefore everyone can make a reasoned judgement.”
Much of what you will listen to here is very much the product of fresh inspiration from the Californian band.
“What we do is just gradually let the compositions percolate over a period of time,” explains Okumoto. “There is one song, 'To Breathe Another Day', where we took a part from a different song, because it worked a lot better in the new arrangement. That's what we do. Nothing is rigid, and everything's flexible. We delight in finding new ways to make things work.”
One key change on this album sees the return of drummer Nick D'Virgilio, who originally left in 2011. But both Leonard and Okumoto play down D'Virgilio's long term role.
“Well, we are very happy to have Nick back with us for the album,” says Leonard. “But right now, it does not go any further.”
“We would love Nick to be able to play live with us again,” adds Okumoto. “The trouble is that he has so many other commitments with his time that I doubt he can fit us into his schedule when it comes to touring. But even if we end up finding another live drummer, then we hope Nick will still be able to go into the studio with us in the future.”
There are also two violinists, a cello player, a viola player and an English horn featured on the album, thereby giving the sound a slightly more evocative and persuasive twist.

So, what can we expect from the new album? Leonard has little doubt about the best way to describe it. “If you enjoy what we have been doing on the past two albums, then I am sure there will be much that will appeal.
Some of the material this time is very bright and melodically appealing, while on the other hand there's also a lot of dark tracks as well. There's no connecting themes between the songs; it's not a concept album. But each song is its own entity.”

Spock's Beard began recording the album in June last year, and in all it took seven months to complete. But it wasn't an album they worked on consistently during this period.
“We had other things to do at times during the seven months,” explains Okumoto. “So, we were not in the studio all the time. The way things work with us, a lot of the recording is done in our own home studios, and then brought together at a later date. Everyone in the band has a hand on the production side, but I do a lot of it with (engineer) Rich Mouser. John (Boegehold, one of the band's regular writing partners) has a keen involvement when it comes to the production side of the material he's written, and it's similar with Alan (Morse, guitar).”
“I suppose everyone in the band has a direct hand in the production, apart from Dave (Meros, bass) and myself,” laughs Leonard. “Mind you, I do take an active interest in what happens in the studio with my songs!
“One thing with doing demos before we select the final list of songs is that you can end up with something one person likes and the rest don't. It happened this time around for me, because there was one track I loved. But nobody else was keen, so it was left off. However, this is a good process, because we are able to make informed decisions on what would work, and what would not.”

And if you believe there's an amazing story behind the choice of the album title, then think again. “We never like to use a particular song title as the overall title for the album,” says Leonard. “Nor do we like to take a lyric from any song and use that. A lot of the time, it's a case of coming up with disconnected words, and then seeing what works best. Usually, it's just a random phrase that paints an overall image to us. This is where 'Noise Floor' comes from. So, if you are searching for any deep and significant meaning behind the choice, then sorry but I am going to have to disappoint you, ha, ha!”
Long term fans of Spock's Beard will find much to commend on what is the band's 13th studio album. Both Leonard and Okumoto feel it is a natural development.
“What we have always strived to do with every album is take a step forward,” explains Leonard. “But not a giant leap. We know what this band are all about, and the aim is always to ensure we don't repeat ourselves.”
“If you have enjoyed what we have done up until now, then I am sure you will like 'Noise Floor',” concludes Okumoto. “It has all the elements people have come to expect from us, but pushed just a little onwards.”