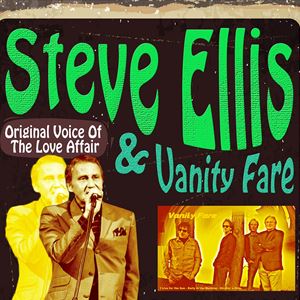 All Steve Ellis performances
Have tickets to sell? – Find out more

On 6 February 1968, one of the UK’s most endearing number ones - Everlasting Love - hit the top of the charts. The group behind it were called Love Affair fronted by singer Steve Ellis who was acknowledged as having one of the best soul-rock voices in the business. With their sharp Mod looks and a host of national TV appearances behind them, Love Affair found themselves enjoying the kind of exposure and adulation that was being afforded to the likes of the Beatles and Rolling Stones.

Their version of Everlasting Love remains a stone-cold classic, one which not only reached number one in the UK, but went Top 10 in 7 other countries and has amassed over 10 million sales to date. Its enduring charm has seen it copied by everyone from U2 to the Cast from Casualty, as well as appearing in numerous films and adverts globally. However, the only member of Love Affair to appear on the actual record is Steve Ellis and it’s this fact that provides the backdrop to a 50-year tale of triumph, tragedy and resurrection.

2018 marked a very important anniversary for Steve Ellis. In the same year that Everlasting Love celebrated its 50th birthday, Steve released a new album ‘Boom Bang Twang!’. Fittingly enough it reunites Steve with the label where he enjoyed great success with Love Affair CBS/Sony and is an expertly crafted mix of new songs and some heartfelt covers with guests and long-time friends Paul Weller, COW, Manfred Mann’s Mike D’Abo, Kev Wallbank (The Dream Foundry), Andy Crofts and Ben Gardelier (The Moons). ‘Boom Bang Twang!’ is the work of a man who believes in not resting on his laurels.