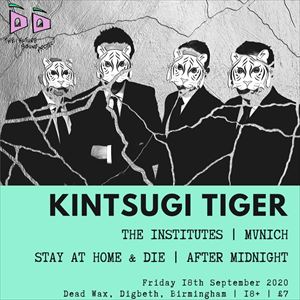 All TFSP: KINTSUGI TIGER performances
Have tickets to sell? – Find out more

Fan-to-Fan Resale Tickets
The Future Sound Project are proud to say that they return to Dead Wax Digbeth bringing you the hottest local music lineup!
Kintsugi Tiger
Hailing from the The Midlands, (UK), Kintsugi Tiger pieced together from the broken relics of various musical vessels in 2019. With influences from Biffy Clyro to Radiohead this 4 piece indie rock outfit unleash barbed edged tunes in concise crafted packets, tackling the torments and tortures of mental battles with a defiant unwavering stance.
Couple this with blistering live performances backed by the confidence of hundreds of previous gigs in former incarnations, including headline slots on the Kerrang Radio stage and numerous festivals nationwide, and you get the melee of music that is Kintsugi Tiger. Broken made better.
https://www.kintsugitiger.co.uk/
Instagram: @kintsugitiger
Facebook search: Kintsugi Tiger
Youtube search: Kintsugi tiger
- - - - - - - - - - - - - - - - - - - - - - - - -
The Institutes
"Spellbinding... anthemic songs" - THIS FEELING
- - - - - - - - - - - - - - - - - - - - - - - - -
Mvnich
Formed in Coventry after a chance drunken encounter outside a pub one night, MVNICH have been perfecting their sound since late 2018. The 4 piece have become one of the most intense and captivating live performers in the midlands over the past year and have been lauded for their vastly impressive shows. With support slots alongside Catholic Action and BLVFF under their belts as well as a sold out show at The Tin in their hometown, MVNICH are stepping into the spotlight with ease.
Consisting of Daniel Davis (vocals, guitar), Phil Callinan (guitar, vocals), Tom Godwin (bass) and Connor Davis (drums) the 4 piece bring together an array of different sounds from blues to post punk. Davis’ snarling vocals produce a story of love, loss and everything in between while a thunderous bass and catchy guitar hooks encapsulate what makes MVNICH one of the most exciting new bands.
The band released their debut single 'Hard To Breathe' in February of this year to rave reviews: ditto.fm/hard-to-breathe-mvnich
- - - - - - - - - - - - - - - - - - - - - - - - -
Stay at Home and Die
Stay At Home And Die are a four-piece emo band, based in Birmingham and the West Midlands. The band consists of Ollie Bedworth on guitar, Ellie Ashford on Vocals, Fraser Somers on Drums and Sam Rudkin on Bass.
Having formed while studying at uni together in 2018, the band has continued to use their music as a way to express their inner sadness in an energetic, chaotic and powerful manner. The bands' music is mostly a melting pot of different genres such as midwestern emo, math rock, and alternative rock, with bands such as Bay Faction, American Football and Blink 182 being where the band draws much of their songwriting influence from.
The band is currently in the studio recording their first singles. Stay At Home And Die are ready to explode onto the Birmingham music scene with a wave of sadness nobody is expecting.
After Midnight
After Midnight are a Birmingham based Alternative rock band which formed in the summer of 2018. The four piece act attempts to recapture the sounds pursued by Alternative music icons of the 90’s such as The Smashing Pumpkins, Nirvana and Placebo. Although they have not been together long the band has already played a numerous set of gigs throughout the Birmingham music scene including the 02 Institute and Academy 3, The Flapper and The Jacaranda in Liverpool.
TICKETS £7 / 18+