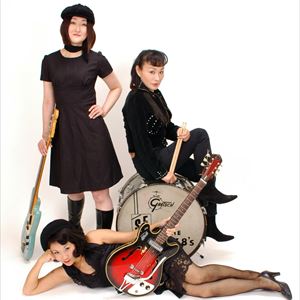 The 5.6.7.8's
The Masonics
Bruce Brand
Micky Hampshire
John Gibbs
All The 5.6.7.8's performances
Have tickets to sell? – Find out more

The 5.6.7.8's hail from Tokyo, Japan and were formed in the early 1990's. Stylistically, the band take their inspiration from Fifties & Sixties Rock 'n' Roll and have been compared to artists such as Link Wray, Dick Dale, The Sonics, Bo Diddley, The Trashmen, Chuck Berry, The Detroit Cobras and more.

They performed three songs in the 2003 Quentin Tarantino film 'Kill Bill Vol. 1' where they performed covers of The Rock-a-Teens song "Woo Hoo", The Ikettes song "I'm Blue" and their own track "I Walk Like Jayne Mansfield".

Their 1991 debut eponymously titled album on Hangman Records carried on the sound and the spirit of The Milkshakes. More albums have followed on Sympathy for the Record Industry, Vinyl Japan, Damaged Goods and Dirty Water Records.