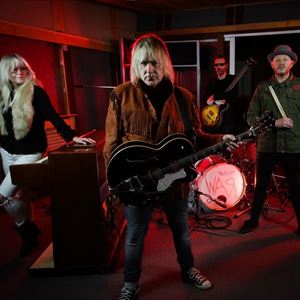 The Alarm have sold over 6 million albums and had 17 singles in the UK top 50 in their 40 year career.

1983 saw the band breakthrough in the USA with the single The Stand whilst entering the UK charts soon afterwards with the evergreen song Sixty Eight Guns. Further classic singles followed such as Where Were You Hiding When The Storm Broke?, Rain In The Summertime (which has been covered by The Killers and Smashing Pumpkins), Strength, Absolute Reality, Rescue Me and many more.

The Alarm have shared the stage with acts such as U2, The Pretenders, The Rolling Stones, The Jam, Bob Dylan, The Police, Big Country, The Undertones, Stiff Little Fingers, The Boomtown Rats, Pat Benatar, The Psychedelic Furs, Simple Minds, and Queen.

The band's latest release was 2021's WAR album which was conceived and recorded in 50 lockdown days.