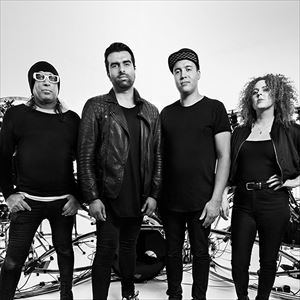 All The Bays performances
Have tickets to sell? – Find out more

Forget every rule you've ever been taught about live music. Ignore every outmoded notion of what it is to be a 'live' band. Join us this April when The Bays return to The Jazz Cafe.

The Bays only perform live, they don't have a set-list and they couldn't ever play the same performance twice. It's all about the moment - an experience or an event that exists between the band and the audience for one time only.

What drives this band is a need to communicate with their audience in a way not possible with the format of traditional live bands. There are no 'songs' as such to perform, there's no album to promote, there are no commercial imperatives at play.

A huge name in electronic drumming and live drum and bass, Andy Gangadeen has spent the last decade on the road with Chase and Status. Alongside this commitment, he became musical director for several hugely successful touring acts including Labrinth, Rudimental, Clean Bandit, Anne Marie and Wilkinson. Here Andy met the two new Bays Oli and Kaz.

First new edition, Oli Wiseman has worked extensively with Anne-Marie and Drum and Bass giant, Wilkinson. Oli has honed his skills with electronic drumming and was an obvious choice for the new line-up.

Up next we have Kaz Rodriguez, an international drummer, composer and hybrid musician using his techniques of summoning live breakbeats on the drums and manipulating time. Kaz has been nominated on numerous compositions for best drum album compilations, also featuring on the front cover of Rhythm in 2016 and 2020. Having had a strong influence from The Bays as he grew up learning so much from Andy Gangadeen, he now begins his journey as a member of The Bays family.


Last but not least newest addition Aicha Djidjelli, A trained drummer, pianist and singer, her focus lies on the creative hotbed between acoustic and electronic drumming. Aicha promises electrifying percussive shows and is currently working with Hans Zimmer both live and studio along with UK artist Ghostpoet.