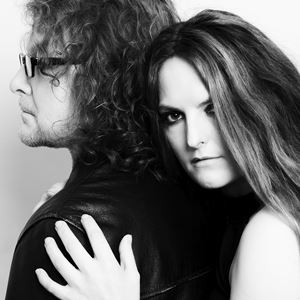 With their critically acclaimed album Mesmeranto (Esoteric Antenna, 2019) entering the official rock
charts at number 18 and being voted number 4 in Top 10 Albums of the year by New York’s Big
Takeover Magazine, award-winning electronic folk pioneers The Blackheart Orchestra took their
music to a new, unexplored dimension with their lockdown all-instrumental album Mute (May 2021)
which reworked tracks from their back catalogue.
Described by the Progressive Aspect as “simply stunning”, kcwlondon remarked, “Who would have
thought fifty years ago that Psychedelic Folk Rock’s future would be in such safe hands?”
Vocalist Chrissy Mostyn and multi-instrumentalist Rick Pilkington combine their classical influences
with vintage synthesisers and ultra-contemporary electronica to create highly emotional music that
has been described as a modern-day Pink Floyd, a more accessible Portishead and with many
comparisons to the creativity of Kate Bush.
Live, the band tours relentlessly building up a dedicated and loyal fanbase and pre-lockdown opened
for Hawkwind on their UK tour including a sold-out show at London’s Royal Albert Hall.
The Blackheart Orchestra are two voices and thirteen instruments that create a unique musical
experience. A new album will be released to coincide with their May 2022 UK tour.