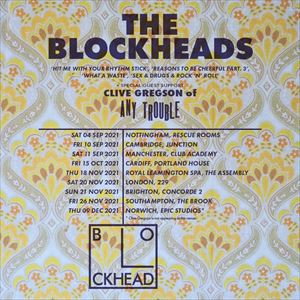 All THE BLOCKHEADS 2021 TOUR performances
Have tickets to sell? – Find out more

As Ian Dury & The Blockheads they went back out on tour, and in 1978 released What a Waste a single that reached #5 in the U.K. charts. They were then joined by saxophonist Davey Payne and toured the U.S.A supporting Lou Reed across the U.S.A

1979's #1 single Hit me with your Rhythm Stick was followed by Reasons to be Cheerful, Part 3 (#3 in the UK charts) and the classic Do It Yourself LP.

In 1982, Ian Dury & The Blockheads disbanded until the early 1990's when they reformed to perform at the 'Madstock' festival in Finsbury Park headlined by Madness.
Clive Gregson was the leader of new wave group Any Trouble who released some cherished recordings on Stiff Records between 1980-1984. Clive had a successful solo career and also worked alongside Christine Collister achieving worldwide success. Clive has toured and had songs covered by artists such as Richard Thompson, Nanci Griffith, Jimmy Buffet, Eddi Reader, Fairport Convention, Kim Carnes, Norma Waterson and more.