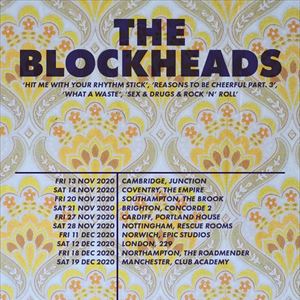 All THE BLOCKHEADS 2020 TOUR performances
Have tickets to sell? – Find out more

As Ian Dury & The Blockheads they went back out on tour, and in 1978 released ‘What a Waste’ a single that reached #5 in the U.K. charts. They were then joined by saxophonist Davey Payne and toured the U.S.A supporting Lou Reed across the U.S.A.

In 1982 Ian Dury & The Blockheads disbanded until the early 1990's when they reformed to perform at the 'Madstock' festival in Finsbury Park headlined by Madness.