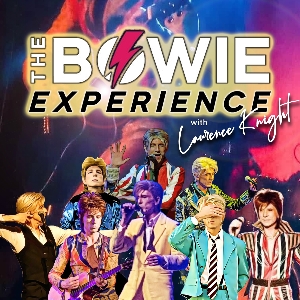 Since 1997 Laurence has been touring the UK, Europe, UAE, and Australia with his tribute to David Bowie, ‘The Bowie Experience’ from Brisbane to Dubai to The Indigo O2 London Laurence’s Bowie Experience is the only David Bowie tribute in the world that was regularly featured on David Bowie’s own web site when he was alive. The show has all the hits you would expect and some lesser known surprises to delight and entertain.

The Bowie Experience are the best Bowie tribute band in the UK. They have toured extensively throughout the world with their critically acclaimed show. This is a 2 hour show and The Bowie Experience’s
set will be a true reflection on David Bowie’s long and eclectic career, mixing deep cuts with all time fan favourites. Which costume changes & a huge sound, this gig really is one for the true 'Diamond Dogs' and the dedicated 'Cat People'!

With performances at the official ‘David Bowie Is’ Exhibition at The Victoria & Albert Museum in London, at The Royal Albert Hall and alongside The Cure, Boney M, Roy Wood and the Boomtown Rats and with TV appearances on Sky and the BBC, vocalist, actor and multi-instrumentalist, Laurence Knight, is considered the world’s number one David Bowie performer.