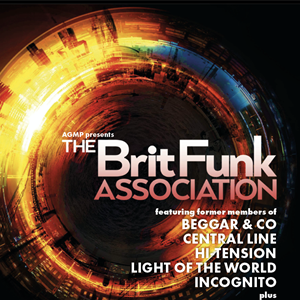 The Brit-Funk genre started in the late 1970’s and was a catch-all phrase coined by Record Mirror Magazine’s James Hamilton to describe the distinctive mix of jazz-fusion-funk-disco music being made by UK bands such as Level 42, Light of the World, Freeez, Shakatak, Central Line, Hi-Tension, Morrissey / Mullen, Second Image, Direct Drive, Linx, and Incognito.

The Brit-Funk Association is a new all-star project featuring musicians from Beggar & Co, Central Line, Hi-Tension and ex-members of Light of the World, and Incognito to perform from each of the band’s back catalogue such as Time, Somebody (Help Me Out), Walking Into Sunshine, Hi-Tension, British Hustle, There’s a Reason, I’m So Happy, London Town, Nature Boy, Everyday and choice selections of band’s that influenced them by acts such as Mass Production, Kool & The Gang, Roy Ayers Ubiquity and more.