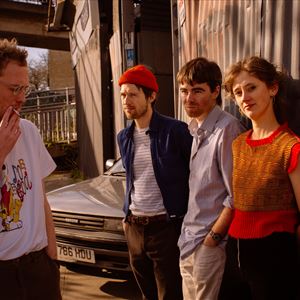 All The Cool Greenhouse performances
Have tickets to sell? – Find out more

The Cool Greenhouse play hypnotic, home-brew postpunk with an almighty lyrical bite. Having caused a stir on the underground DIY label circuit in 2019, The Cool Greenhouse released a handful of celebrated 7’'s and EPs on Lumpy Records, Market Square and Drunken Sailor in past years. 2020 brought the release of their much-anticipated debut studio album on Melodic Records; taking their lo-fi home-recordings and showing off a newly developed, fuller sound, lifting their signature style to previously unexplored heights. Last year the band also emerged as a full line-up, disorientating and delighting their audiences in equal measure; supporting the likes of The Stroppies, Bad Breeding and Do Nothing. While they were slated to play a string of festivals this year including The Great Escape and Glastonbury, patience is indeed a virtue and The Cool Greenhouse’s return to the stage will see the band picking up where they left off / capturing a whole new set of fans along the way.

"The Cool Greenhouse could certainly be part of the driving force extending the frontiers of modern rock." - Gigwise

“The Cool Greenhouse exist in diametric opposition to me and you and our stupid short attention spans.” - The Quietus