The Cravats + The Bitter Springs 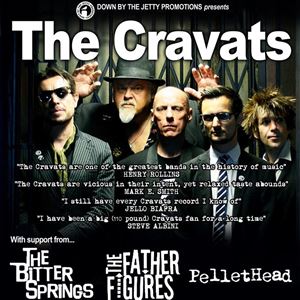 The Cravats
The Bitter Springs
Pellethead

All The Cravats + The Bitter Springs performances
Have tickets to sell? – Find out more
Fan-to-Fan Resale Tickets

The first single from the Cravats was the self-financed “Gordon”, released in 1978. On 31 July 1979 they recorded their first session for the John Peel show on BBC Radio 1. Soon after they received a recording contract with Small Wonder Records. Three further Peel Sessions followed on 6 October 1980, 18 August 1981 and 15 November 1982.

The band had a rest in 1982, with Dallaway and The Shend forming The Very Things, as well as DCL Lococmotive and The Babymen.

The Cravats original members The Shend and Svor Naan put together a ‘live ensemble’ for the Rebellion Punk Festival in August 2009/2010.[2]The Cravats live ensemble have continued to play live with gigs in Dublin, London and a further appearance at Rebellion in August 2011. They will also be performing at the Incubate Festival in Tilburg, Holland in September and are special Guests of Steve Ignorant (Crass) at the final ‘Last Supper’ show on November 19th at the Shepherd’s Bush Empire in London.

A CD reissue of their first LP, ‘The Cravats In Toytown’ is planned for August 2012 which will be accompanied by a CD featuring a complete remoulding of the original ‘In Toytown’ 8 track masters by Penny Rimbaud (Crass).

In 2016 The Cravats release their first new material in more than 30 years with a two track 7″ ‘Jingo Bells’ and ‘Batter House’ followed by another 7″ ‘Bigband’ and ‘Blurred’. Their latest album ‘Dustbin of Sound’ was released in Autumn 2017 on Overground Records.

"The Cravats are vicious in their intent, yet relaxed taste abounds" - MARK E. SMITH

"Whenever I start to feel important, I think 'well, I never did much for The Cravats and I didn't stop Toyah" - JOHN PEEL

"I still have every Cravats record I know of" - JELLO BIAFRA

The Bitter Springs are one of the most enduring and unpredictable independent rock groups this country (England) has ever produced,
much preferring to go unnoticed rather than be diluted by compromise

Working in the stubborn single minded tradition of groups like Dexy’s Midnight runners, The Fall and The Smiths always prepared go
where the Song takes them
They hail from the London suburbs of Hampton and Teddington
Which is often reflected in the songs?

The band evolved from Last Party, who had formed in 1982 and eventually created their own Harvey records label and enjoyed cult success
with 2 Albums and countless singles and ep’s, among them melody maker and NME singles of the week and
2 very influential John Peel sessions

Always changing musical styles from one song to the next, the only constant being the distinctive voice and lyrics of Simon Rivers,
who is often cited as one of England’s finest wordsmiths

They have continued to release many more singles and albums to date (always receiving great acclaim and accolades).

As well as 2 NME singles of the week, they’ve had A Mojo album of the month and even appeared in a
‘great lost albums’ feature in of all places ...Vogue magazine
The Band released 5 very different singles in 2010/11:
AND EVEN NOW / MY LIFE AS ADOG IN A PIGSTY / TV TEARS / GARY GLITTER FAN CONVENTION / SNOWFLAKES IN JUNE
All appearing on their 7th album the Double CD

26 songs across 2 CD’S
CD1 featuring some great trumpet and sax from Terry Edwards (Tindersticks ,Robyn Hitchcock, scapegoats)
Holy Joy’s Johny Brown Guests as the Birdman of Wormwood Scrubs on the epic 'Don’t write a song about it.'
and Julian Wilson (Grand Drive) plays his beautiful Hammond on the bands update of Jim Fords Harry Hippy
CD 2 has a more electronic/acoustic feel and along with the 4 part album Diary that is POWERLESS
You’ll find the Band adopting other lovely Ollie Cherer (Dollboy) Instrumentals and giving them words from the house of Springs

‘’Such raw Emotion will make your heart explode’’
-Morning Star-