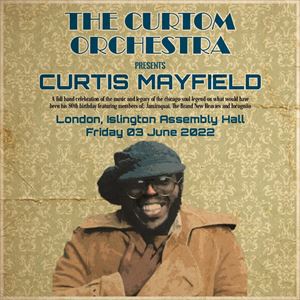 "Curtis Mayfield is to soul music what Bach was to classical, and Gershwin and Irving Berlin were to pop music; a soul laureate and catalyst for the heart and soul of a song and a people" Aretha Franklin

The Curtom Orchestra are an all-star band featuring members of Jamiroquai, The Brand New Heavies, Incognito and more who will be celebrating the life and music of Curtis Mayfield and The Impressions on the night of what would have been the Chicago Soul Legend's 80th Birthday.

It is now 23 years since the passing of Chicago Soul Singer-Songwriter & Producer Curtis Mayfield. Born in Chicago, Illinois, Curtis Mayfield commenced his musical career as part of a gospel choir. After meeting Jerry Butler he formed The Impressions in 1956. The Impressions recorded many classics including We're a Winner, I'm So Proud, It's All Right, For Your Precious Love and the politically-charged People Get Ready.

Curtis Mayfield started his solo career in 1970 releasing the Curtis LP which featured Move On Up, one of his most enduring songs. The album was the first release on his Curtom Records label. Other artists signed to the label included Leroy Hutson, Linda Clifford, Mavis Staples, Baby Huey and the Babysitters and more. His 1972 Blaxploitation film soundtrack Superfly was voted #72 in Rolling Stone Magazine's greatest albums of all time.

The Curtom Orchestra will be performing all of the classics from throughout the career of Curtis Mayfield tonight.

Curtis Mayfield - Superfly from The Signature Sounds on Vimeo.