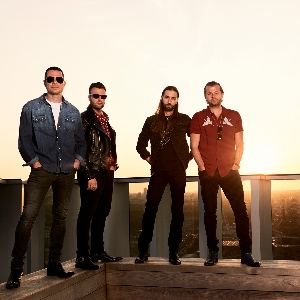 When The Dust Coda released Mojo Skyline, their critically acclaimed (8/10 Classic Rock), Top 30 UK selling sophomore album in March 2021, the world was a very different place. Live music was virtually non-existent and at the time nobody knew when it was ever coming back. Fast forward 9 Months and the flood gates had opened, rock n roll fans, having spent most of that year indoors soaking up the nuances of ‘Mojo Skyline‘ were back with a vengeance to hear this classic played live and loud!

Starting with a quick jaunt across Europe, late 2021 saw the band performing in the Netherlands and Germany for the first time, making their live European Television debut on the legendary German Music show ‘Rock Palast’. Then came the ‘Mojo Skyline‘ UK headline tour, seeing the band deliver on the expectations of the album at sold out venues around the country. 2022 and the band are in the throes of making up for lost time.

With a UK tour supporting Iron Maiden legend Adrian Smith’s side project Smith Kotzen in the bag, an appearance at Netherlands giant spring shindig Paaspop Festival, they are ready to head to Southern Spain in June to join White Snake, The Scorpions and Black Label Society at Rock Imperium Festival in Cartagena.

Propelled by the news of their track ‘Jimmy Two Times, taken from ‘Mojo Skyline’ making the Classic Rock Magazine 300th Anniversary playlist showcasing their chosen 300 greatest songs of all time, The Dust Coda are rising to the challenge and heading into the studio this summer to make album number three, their 2nd release on Earache Records. (The Rival Sons, The Temperance Movement, Massive Wagons, Those Damn Crows). Late October the ‘Mojo Skyline’ era will start to end with the ‘Mojo Rising’ UK Tour. Along with all the fan favourites the band will be performing deep cuts off their 2017 debut and ‘Mojo Skyline’’ that have not been aired since before the pandemic. Joining them on the road for the first time are the very talented The Howling Tides.