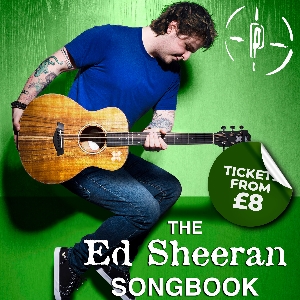 Fan-to-Fan Resale Tickets
THE ED SHEERAN SONGBOOK
FEATURING JACK BOWATER
The ultimate authentic tribute to the World's biggest selling pop phenomenon.
Date: Friday, August 5th
Doors: 8pm
Jack matches Ed stride for stride in vocal ability, guitar playing and stage presence... and bears an uncanny resemblance to the man himself.
Performing solo, using just a guitar and a loop pedal, he guarantees an impeccable performance that will move any heart.
Featuring all of the songs you know and love including Shape of You, Galway Girl, Perfect and Thinking Out Loud along with many more, this is the ultimate night out for any Ed Sheeran fan.
“We had an exceptional night when Jack Bowater came and played to a packed house as Ed Sheeran. It was as close as you could get to the real thing, the audience loved him and I would have no hesitation in re-booking the show”. Gary Melvin, Owner, The Diamond, Sutton in Ashfield.
“Jack Bowater gave us his Ed Sheeran Songbook show and quite outstanding it was too. I have seen the new-fangled loop recorder used before on guitar and vocal, but never in such a brilliantly entertaining fashion. In my view, this is 21st Century tribute music entertainment at it’s very best!”. Mark Ritchie, Stratford Artshouse.
_________________