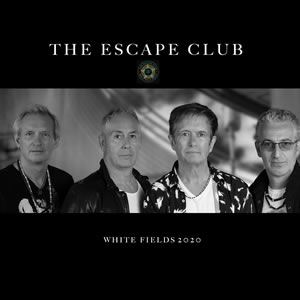 All The Escape Club performances
Have tickets to sell? – Find out more

The Escape Club are back in London after a thirty year absence to play what has become their ‘cult’ first album, ‘White Fields’

The band is best known in the USA and around the world for its Grammy nominated #1 hit, Wild Wild West as well as their other top forty US hits, I’ll Be There, Shake for the Sheikh and Call it Poison

Fresh from a tour of the USA in 2019, the band are converging from around the world to play at Nell’s in London on June 27th 2020.

It has been a long time coming. The band’s loyal UK fans have waited to see them play live for many years. The last time The Escape Club played in the UK was supporting The Alarm in the late Eighties.

The White Fields album is a favourite for many people and the band will be playing it in its entirety, along with some bonus tracks.

Dave Sharp of The Alarm has kindly agreed to open the evening as a special guest.

VIP tickets are at: