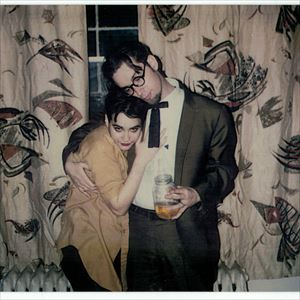 
Second date announced! The previous show sold out in a wink, get your tickets while you can!
The Handsome Family have written some of the most haunting and beautiful songs in American music. During a 30-year career, Brett and Rennie Sparks have created songs that transform the mundane landscape of modern life into a place of mysterious portent.

Initially influenced by early country, post-punk and DIY indie rock, there is a compelling seam of darkness in their music which underpins the couple's lightness and laughter in their live shows. Their songs take place in parking lots and big box stores, under overpasses and in airports. They sing about Custer's last stand and automatic lawn sprinklers in the same song and Rennie's lyrics often focus on the myriad creatures that live at the edges of the man-made world: the sparrows, rats, cockroaches and crows that share our cities.

Many great songwriters have covered their work, among them Jeff Tweedy, Jason Lytle, and Andrew Bird as well Christy Moore. David Bowie wrote the words, "The Handsome Family" in a notebook right before his death. Who knows what could have been?

"Far From Any Road," which became a global hit after it was used as the theme to season one of True Detective has garnered The Handsome family a whole new audience, including Bruce Springsteen and Guns 'N Roses who have used "Far From Any Road" as walk-in music.

In 2020 Loose Music will release their first two records, Odessa (1995) Milk & Scissors (1996), on vinyl LP. This will be the first time these records have been released in Europe.

For Handsome Family fans these records are a must. Odessa reveals the early style of the band and Milk & Scissors illustrates how their songwriting transformed after Rennie began writing lyrics. On their spring 2020 tour they plan to play selected gems from these new/old records.

Daniel Knox -
With a baritone as dynamic as it is indestructible, Chicago-based Daniel Knox narrates compositions with a perverse and sometimes comical wit, guiding the listener through sprawling worlds that exist just out of frame.
His work has inspired a diverse cast of collaborators that lie inside and outside his realm of alternative Americana, such as Jarvis Cocker, Thor Harris (Swans, Freakwater), and The Handsome Family with recent performances that include the likes of Rufus Wainwright, Andrew Bird, and Swans.

"Knox is a masterly narrator bringing a refreshing directness to his filmic tales of nocturnal wanderings, lonely roads, and mysterious figures in parked cars." - Uncut

Won't You Take Me With You is Knox at his most accessible and assured - the unconventional beauty of his piano style fitting perfectly with long dream-like stretches of synthesizers while Knox's rich baritone buries deeper within the music. It exists as a line in the sand and a turning point, a perfect entry point into looking back on a fascinating career while at the same time the moment to strap in for whatever is to come.

Say you are coming: Here