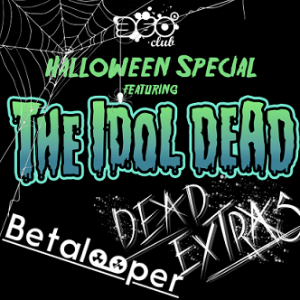 ‘The Idol Dead have excelled themselves in every way and produced an album they can be proud of.’- UberRock

‘They are the defibrillator that needs to be pressed hard against the chest of the dead horse that the music biz keeps flogging.’ - Reservoir Droogs

‘They channel the energy of their songs with a confidence and conviction of a stadium-sized outfit.’ – RPMOnline

“Unearthing Dead Extras is to unearth a gem; you’re unlikely to find another band who does what they do to the same degree of skill- I wouldn’t bother trying.” - Lippy Magazine

"The energy coming off the stage is something I’ve only felt a few times in my gig-going life. Dead Extras played like they were playing a huge venue." - Local Sound Focus

The howling sound of the underground, a chaotic cult of punk-infused metal mayhem, full of howling choirs of screams and shouts. Emerging from hibernation for the first time since last year, Dead Extras are bringing their chaotic energy back to the live scene."

A songwriter and musician from Leeds, UK. His music is a fusion of alternative rock, electronic and folk influences. In 2019, he released “Piggy’s Farm” - an angry and politically charged EP that focussed on a range of issues from binge drinking to corporate greed. Emerging from lockdown with a more refined industrial sound, his live performances exhibit powerful vocals, grungy guitar hooks and catchy drum loops.