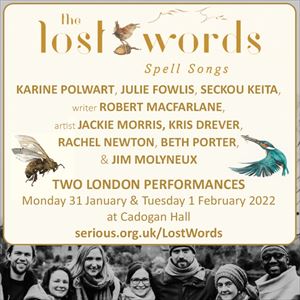 Spell Songs is a musical companion piece to The Lost Words authored by Robert Macfarlane and artist Jackie Morris; a celebrated 'spell book' rich with poetic rhythms and imagined birdsong that naturally invited a musical response.

Karine Polwart: songwriter, theatre maker and storyteller, whose script for her show Wind Resistance was chosen by Robert Macfarlane as The Guardian's 'Best Book'

Julie Fowlis: taking forward the Gaelic tradition, Julie is known for her crystalline and intoxicating voice. Winner of BBC Radio 2 Folk Singer of the Year

Seckou Keita: an exceptional and charismatic musician. Arguably the most influential and inspiring kora (22 stringed West African harp) player of his generation

Kris Drever: one of Scotland's finest songwriters, a member of Lau, and BBC Radio 2 Folk Singer of the Year

Rachel Newton: a singer and harpist with a reputation for 'haunting and compelling' (Guardian) performances and was awarded BBC Radio 2 Folk Musician of the Year

Beth Porter: a well-known cellist on the UK folk and acoustic scene and one half of The Book Shop Band

Jim Molyneux: a prodigious talent on many instruments, with an ear for a variety of genres from folk through to jazz and hip hop

Spell Songs has enjoyed standing ovations at sellout performances at major venues around the UK, including London's Southbank Centre and Hay Festival

The ever-increasing body of original work has developed further, with a new album on its way. New material is previewed in a special free stream from The National History Museum next Tuesday 27 April 2021 - enjoy the show at http://nhm.ac.uk/spell-songs