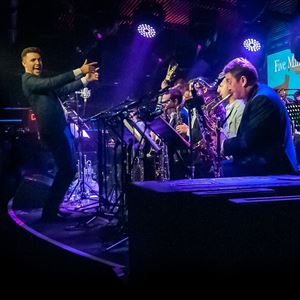 Louis Dowdswell
All The Louis Dowdeswell Big Band performances
Have tickets to sell? – Find out more

12s - 17s must be accompanied by an adult. No refunds will be given for incorrectly booked tickets.

The Louis Dowdeswell Big Band: Live Under The Bridge

VIP Meet and Greet:
Meet Louis and band arranger Callum Au.
Get to talk to Louis and Callum about the album, trumpets, life, the music industry, or anything you can think of in an informal meet and greet setting.  Louis and Callum have loads of great advice, stories and knowledge to share and there will be a chance to find out about various new releases that they will have coming out in the near future.
There are only a limited number of tickets available and alongside this you priority entrance to the club and first refusal on booth seating.

12s to 17s to be accompanied by an adult

Louis Dowdeswell, young trumpet firebrand, returns to Under the Bridge for one night only. Accompanying him is YouTube’s most famous big band, the Louis Dowdeswell Big Band, performing original arrangements specially written for the band by Callum Au.

Louis is fast becoming one of today’s most talked about trumpet soloists. His ferocious technique and gravity-defying upper register are spoken of in hushed tones in bandrooms, music schools, and orchestra pits around the world. His YouTube channel has had over ten million views over the past three years.

Featuring some of the UK’s finest jazz and commercial musicians playing a programme of classic big band favourites and exciting new arrangements from Sing Sing Sing to the Incredibles suite, this promises to be an evening’s entertainment not to be missed!