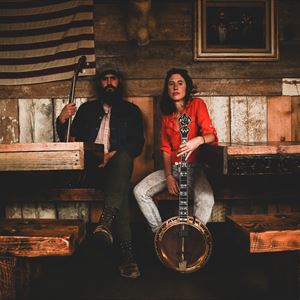 All The Lowest Pair performances
Have tickets to sell? – Find out more

Jezebel Music are proud to present The Lowest Pair, at The Rose & Monkey Hotel in Manchester, on Thursday 14th May. The duo are on the road with their brand new album, The Perfect Plan. Very special guests are Manchester's Lucy & Virginia.

The Lowest Pair is Kendl Winter and Palmer T. Lee.  Kendl comes from Arkansas, but she found her way to the Pacific Northwest after high school. The evergreens and damp air of Olympia, Washington, and the boundless music scene, had equal draw. She released three solo records on Olympia’s indie label, K Records, and performed in ramblin’ folk bands and anarchic punk bands before starting The Lowest Pair in 2013 with Palmer T. Lee. Palmer built his first banjo when he was 19 from pieces he serendipitously inherited. Shortly after deciding songwriting would be the most effective and enjoyable medium for his musings, he began cutting his teeth fronting Minneapolis string bands and touring the Midwest festival circuit, which is where he and Kendl first met, on the banks of the Mississippi. Over the next five years, they recorded and released four albums of original songs and one covers album, named I Reckon I’m Fixin’ On Kickin’ Round To Pick A Little, Vol. 1. They toured the U.S., or rather, they tour the U.S., in their own version of The Never Ending Tour, racking up over 500 shows, from Bellingham, Washington to Bangor, Maine, from The Shetland Islands to The Bell Inn in Bath.   Brand new album, The Perfect Plan, is released on 24th April 2020.