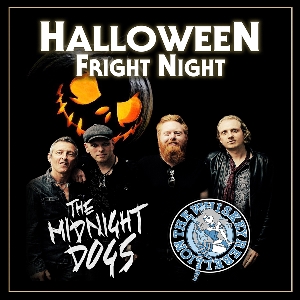 Hailing from Leicester, the Midnight Dogs have evolved into a formidable rock outfit, delivering their own brand of down and dirty rock and roll. With a nod to the retro sounds of the 70s, their lyrical stories are punctuated with catchy riffs and killer basslines, all wrapped up tightly with a rhythmic bow.

Their self-titled debut album was released in 2016 to rave reviews and resulted in special guest appearances with the likes of The Quireboys, Stacie Collins, Dan Baird, Spear of Destiny and The Dogs D’Amour.

From the deepest, darkest jungles of Leicestershire, the Whiskey Rebellion are a band like no other. Performing a blend of balkan gypsy dance music, celtic folk tunes and pure unfettered punk, they provide a sweat-laden performance that leaves audiences stunned and gasping for breath. Featuring a line-up including accordion, banjo, violin, mandolin, guitar, and with a live show renowned for its relentless energy and theatricality, this group of hair-brained harlequins are infamous for whipping any crowd into a frenzy of dance and debauchery.

Support comes from Sheffield-based Silverjet and the City Kids.