The Mourning After + The Lotts Tickets 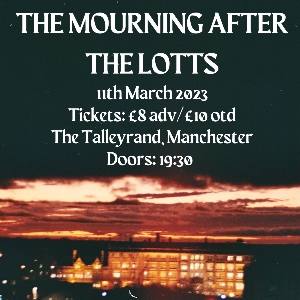 The Mourning After + The Lotts

The Mourning After + The Lotts

The now legendary THE MOURNING AFTER started blasting out garage punk to audiences all over in 1987. After their debut gig in Sheffield they fuzzed with all the charting indie bands of the time…..Primal Scream, Spacemen 3 or My Bloody Valentine. THE MOURNING AFTER played a number of wild shows until 1999.
Then they disappeared in their caves and graves and nobody knows why but the day came they raised from their hidden tombs and “TALL, DARK & GRUESOME” came out on Screaming Apple Records presenting the world again fuzzed up Garage with a snotty attitude! Last year they released “THE TENTH CENTURY”, their masterpiece on Heavy Soul Records.
---------------
The Lotts

Original Garage Rock. Loud, Loudest, Louder..
Forming in 2018 The Lotts, from Warrington have been tearing up the streets of any city they lay their hat in with their loud and raucous rock n roll that could get the stiffest of corpses moving. Formed in 2018 and 3 EP’s deep, they don't plan on slowing down anytime soon.
Stooges meets Dr. Feelgood, but louder.

Radio 6 Recommends with Steve Lamacq - “A thing of great rowdy beauty”
Radio 1’s Indie Show with Jack Saunders - "I don't know what it is, there's just something special about this band"
Radio X
'" Don't' is our Hot One of the day on X-Posure