The Music of Northern Soul Live 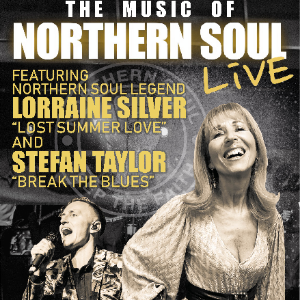 STEFAN TAYLOR  and THE SIGNATURES are the UK's leading Northern Soul Band. They have now added as headline artist  for their 2021 tour original Northern Soul Legend LORRAINE SILVER.  The band put their own expression to many classic Northern Soul numbers creating a true balance between authentic and modern in sound. Step back to the sounds of the Twisted Wheel, Blackpool Mecca, Golden Torch and Wigan Casino. The Signatures give a full set of passion and energy  guaranteeing to get the audience “Out on the floor”.

Since 2016  STEFAN TAYLOR has been appearing as regular frontman with THE SIGNATURES   performing classic tracks such as ‘The Night’ ‘Do I Love You’ ‘Higher & Higher’ and all the other firm favourites. He has an abundance of personality &  sings with passion direct from the soul and has an amazing vocal range.

The track went on to become an  iconic track at the legendary WIGAN CASINO in the 70’s  and due to high public demand the single was re-released on Casino Classics label and sold in excess of 30,000 copies.

Now  54 years later  she has been in the recording studios with legendary record producer IAN LEVINE to cut a brand new single ‘STANDING AT THE INTERSECTION’/ ‘BEST TIME OF MY LIFE’ These have been written especially for her after he saw her perform at the recent ‘Northern Soul Survivors Weekend’ at  Butlin’s Skegness which had 8000 devoted Northern Soul fans in attendance.