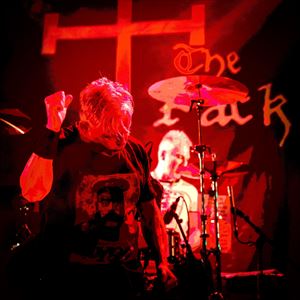 The Pack
All The Pack performances

The legendary Pack featuring Kirk Brandon return for a run of very select shows to tie in with an appearance at the renowned Rebellion festival.

The origins of The Pack started with the original band the Pack of Lies. It consisted of myself Kirk Brandon, John Fuller (An old school friend) and a Scottish drummer called Rab Fae Beith. We rehearsed and got the songs together at John’s uncle’s house in Stanmore.

The Pack itself was formed sometime in 1978 in Clapham, South London amongst the punk anarchist scene set amongst the backdrop of the totalitarian government of Margret Thatcher – at a time when the country stood at the abyss of total chaos.

Looking back, the lyrics to the songs were simplistic, aggressive, confused, funny and silly – much like myself at the time. Life consisted at the time of trying to survive on the streets and squats of the south London- the whole period was funny, violent, grim and all at the same time, the band mirrored its surroundings – so no excuses made.

The bands first gig, now consisting of myself, two Canadian brothers John and Simon Werner and Rab. The gig was as much a shock to the band as to the startled filmgoers.

I remember they showed Marlon Brandon in the “Wild One” before we went on, so we were all juiced up for some kind of riot! What actually happened was about 150 people with thousand yard stares stood stock-still, stunned at the power at the noise of the band – we were fucking angry!

A lot of the shows The Pack played ended up in mini riots and many venues were trashed, one night we played Deptford, South London at The Crypt, I recall thinking to myself great everybody’s dancing – but only when we had finished our set everybody was still dancing – in fact they were all trying to kill each other. We left the stage as The Crypt was being deconstructed.

All band members myself included, I would describe as a fairly unhinged bunch of people, and what passed for normal, amongst the band and its constant crowd of friends and supporters, did not tie in necessarily with the outside world as a whole. This is a period that only now filmmakers are beginning to see the significance of. With all the violence.. Drugs and with one member of the band becoming religious in the end it had to implode sooner or later.

The music industry would not touch The Pack with a barge pole (apart from King of Kings rough trade single). For the band it was a lifestyle, the idea of making money out of it was just to far fetched and in our own strange way seemed dishonest, preferring instead penury bolstered by dole cheques.

The last ever gig by The Pack took place at the 101 Club in Clapham. Ironically it was completely sold out by the time the band went on stage, however, by this time success was not an option the band was willing to take.

Along the way we lost a few friends and a lot of idealism but for a lot of us the memory still live on.

After a super successful 4 show run in January 2019, the first for 40 years, Kirk Brandon , John Werner, Steve Grantley and Warren Wilson will play a select few shows on 2020.

Full details can be found at: