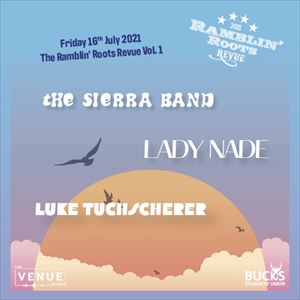 All The Ramblin' Roots Revue performances
Have tickets to sell? – Find out more

We're back for an intimate gig on Saturday 7th November in advance of the full revue returning in April '21.

The Ramblin' Roots Revue is proud to host...

The Sierra Band present Neil Young's 'After The Gold Rush' - 50th Anniversary Celebration
Made up of some of London's finest musical talents, the band honour this enduring album with an intimate live performance in its entirety, including 'Only Love Can Break Your Heart', 'When You Dance I Can Really Love You', 'Southern Man' and the title track, regarded as the centrepiece to the whole album.
Soft, hard. Quiet, loud. Acoustic, electric. The album has it all. Initially receiving a mixed reaction, it kickstarted his solo career and remains one of his greatest ever works with raw, poetic lyrics marking his continued development as a supreme songwriter. https://bit.ly/34hQHTl

The Marriage
Kirsten and Dave have been surrounded by music their entire lives, with Dave first picking up the guitar at the age of 7 and being signed to a major label at 15 and Kirsten spending her summers in Nashville with her father Stuart Adamson, founder of Skids and Big Country. Both have been playing in touring bands since their teens. https://wethemarriage.com
Luke Tuchscherer and David Banks

Luke Tuchscherer and David Banks
Long-time collaborators Luke and David will be playing songs from their highly acclaimed solo releases as well as favourites from their time in seminal UK Americana band, The Whybirds. Luke, now back from a three year stint in New York is already working on a follow up to the brilliant 'Carousel' while David's debut solo record, 'Until The End' is still gaining rave reviews. https://www.luketuchscherer.co.uk & https://www.davidbanksmusic.co.uk