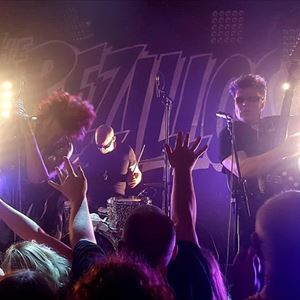 All The Rezillos performances

The Rezillos ripped into the rock scene through a shared love of Sixties Garage Rock, the Spectoresque Girl Group voice of The Shangri Las injected with their inimitable molten attitude and created their unique left-field brand of punk rock and roll.
The Rezillos off-kilter three minute sparkling pop gems and a unique visual style was steeped in a culture of bad boys, bad girls, bad movies and great rock and roll. Their independent debut single, “I Can’t Stand My Baby” shot them to underground fame initially via airings on John Peel’s radio show. Their follow up classic singles “My Baby Does Good Sculptures”, “Top of the Pops” and “Destination Venus” signalled critically acclaimed milestones for the band. The Rezillos recorded their landmark album “Can't Stand the Rezillos” in New York’s fabled Power Station studio, immersed themselves in the local music scene and dropped in during downtime to play a gig at CBGB’s, the hub of Punk Rock music. The album reached the top 10 in the UK album chart and is lauded as punk classic.
Since reforming the band have released several independent singles. Having made it into the 21st century that they sang about so often in the 20th. It's fitting that their rebirth should warp them into the present and still finding themselves in step both musically and conceptually.