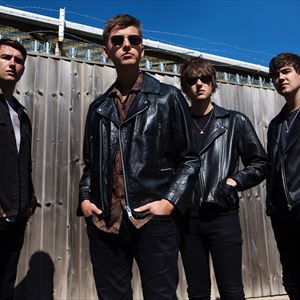 All The Sherlocks performances
Have tickets to sell? – Find out more

With their 2017 debut album 'Live For The Moment', Sheffield quartet The Sherlocks established themselves as key contenders in a new wave of British bands keeping alt-rock and indie vital for a new generation of fans. With their new album ‘Under Your Sky’ out now, the band enter a new chapter in their career with the album’s highly anthemic songs which all have arena-sized choruses, and which deserve to be widely heard and loudly sung.

The Sherlocks will headline at the Docks Academy as part of their UK Headline Tour.
The band will be the first headline music act to perform at the new Grimsby venue above the Docks Beers brewery on King Edward Street.

Their 2020 tour already includes dates at the O2 Academies in Leeds and Sheffield and Rock City in Nottingham. Grimsby is now on that list too which puts the town and the Docks Academy firmly on the map for established touring bands.

The Sherlocks are made up by two sets of brothers from Bolton upon Dearne, near Barnsley: frontman Kiaran Crook, his brother and drummer Brandon, lead guitarist Josh Davidson and his brother and bassist Andy.

Talking about the band’s new new album, ‘Under Your Sky’, frontman Kiaran Crook says, “The first album was us four in a room. We wanted to make it really raw like the Arctic Monkeys’ first album or Kings Of Leon’s. We wanted to capture the live sound and polish it up a bit. With this one we’ve taken it a step further and made it slightly smoother and put more keyboards in. Rather than having the guitars thrashing all the time we’ve tried being a bit sweeter with it. It sounds more contemporary, and we’re looking forward to playing tracks from it in the Docks Academy.”