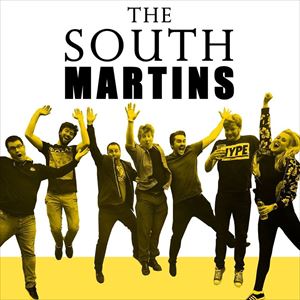 All The Southmartins performances
Have tickets to sell? – Find out more
Fan-to-Fan Resale Tickets

The Southmartins have carved themselves a unique niche in the tribute
scene since forming in late 2009. Playing fast and loose with the back
catalogues of the Housemartins and the Beautiful South (and the
occasional foray into Paul Heaton and Jacqui Abbott's more recent hits)
the band manage to not only bring the sound of these two hugely
successful British bands to their shows but also pull off the neat trick
of making many of the songs their own with energetic, soulful
interpretations and playful arrangements. Very much a band to involve
the audience along the way, expect a great big singalong to classic hits
such as Happy Hour, Good as Gold, Perfect 10, Rotterdam, Caravan of Love
and many more. With a voice as close as you could hope for to Mr Heaton
himself in lead singer Andy (Paul says "They're really good") and a
super-tight band the band have honed their shows at increasingly large
music venues across the UK including playing several times at Paul
Heaton's Kings Arms in Salford.