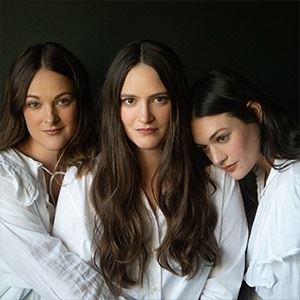 The Staves Samantha Crain
All The Staves performances

All ages welcome, under 16s to be accompanied by an adult. The Staves are thrilled to announce a run of live shows for this Autumn, including returning to Brighton, in support of their new album ?Good Woman', out now on Atlantic Records.
Taking a cue from youthful folk revivalists like Laura Marling, Mountain Man, and the Pierces, Watford, England's the Staves blend the wistful cadences of classic British folk with breezy, Laurel Canyon-era Americana.
The trio was formed in 2010 around the talents of sisters Emily (vocals), Jessica (vocals/guitar), and Camilla Staveley-Taylor (vocals/ukulele), who first learned to harmonize by singing along with their parents' record collection, dominated by the likes of Simon & Garfunkel and Crosby, Stills, Nash & Young. They released their debut EP, Facing West, in 2010, and the same year they performed as backing vocalists on Tom Jones' 2010 gospel collection Praise & Blame.
The trio has toured with Florence and the Machine, The Civil Wars, First Aid Kit and worked with Glyn and Ethan Johns, Bon Iver's Justin Vernon on their albums. They have also had appeared at Glastonbury and were booked in for 2020.
'Oklahoma native, Samantha Crain is a multi talented Choctaw singer, songwriter, poet, producer and musician. As well as being critically acclaimed by Rolling Stone, SPIN, The Guardian, NME, Uncut and many others, Samantha is also a two time Native American Music Award Winner and has toured extensively both internationally and nationally over her incredible 11 year career. This ambitious, folk legend is undoubtedly the perfect contribution to The Staves 'Good Women' tour this Autumn.'
What the band had to say:
?We're so excited and thankful to be announcing a UK tour today. It's been a long old year and we can't WAIT to play music in front of people again! We hope to see all your lovely faces there.?
Info on Good Woman:
Good Woman was written and recorded in a time of severe turmoil for the band, seeing the ending of relationships, the death of their beloved mother and the birth of Emily's first child. Produced by John Congleton, the album stands as a testament to their strength and that of other women, to sisters, mothers and daughters. To love, loss and change. To trying to be a good woman.
'GOOD WOMAN' OUT NOW VIA ATLANTIC RECORDS
Praise for Good Woman
'their three-part blood harmonies form the shimmering centre of an elaborate, album-long soundscape' 8/10 - Uncut
'elegantly nuanced' **** - Mojo
'an album with attitude' - Sunday Times Culture
'pop-rock sophistication' - **** - The Times
'melodic sweetness is bolstered by a sense of urgency and stylistic cool' - **** - The Guardian
'a sophisticated return' - **** - NME