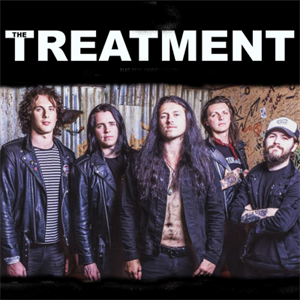 All The Treatment performances
Have tickets to sell? – Find out more

The Treatment are an English hard rock band, which formed in Cambridge in 2008. Previously, the band members had played together under the moniker, 'God Sacks Man'.

In 2011 the band played at Sonisphere Festival[1] on the Jägermeister stage. Later in 2011, a UK tour arranged by the Powerage record label featured The Treatment, alongside New Device, Lethargy and Million Dollar Reload.

After the Medication For The Nation Tour in the United Kingdom in December 2011[2] the band went on tour in support of Alice Cooper,[3] Steel Panther and Thin Lizzy.[4]

The Treatment played on the Pepsi Max Stage at Download Festival in Castle Donnington, UK on 9 June 2012.[5]

In 2012 the band went on tour with Kiss and Mötley Crüe in their The Tour. In 2013 they played at Ozzfest in Japan and four dates with Slash in the UK.[6] They also supported Status Quo on their Frantic Four reunion tour with Quo's original line-up in 2013.

On 29 March 2015 the band announced that their frontman Matt Jones would be leaving The Treatment.[7]

On 7 May 2015 the band announced that Mitchel Emms and Tao Grey were the new members of The Treatment. The band had been playing some secret shows with this line-up, then on 25 July 2015 they played at the Steelhouse Festivalalongside Y&T, Nazareth and UFO.

In September 2017, vocalist Mitchel Emms parted ways with the band.[9]

In December 2017, Tom Rampton was announced as the new vocalist.

On 13 March 2019 the fourth album, called Power Crazy, was released.