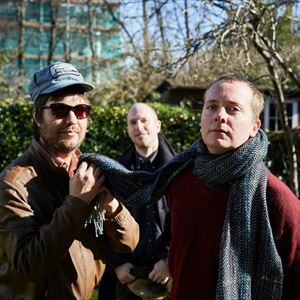 All The Wave Pictures performances
With support from Pushpin

Twenty years after forming in Wymeswold, Leicestershire as teenagers, The Wave Pictures have gone on to be one of the UK’s most prolific and beloved bands. Fond of classic rock, jazz and blues, they are also one of the most accomplished, with Tattersall’s guitar solos becoming the stuff of legend. They have collaborated with varying bright stars of the musical firmament, such as last year’s rock’n’roll surf-garage-rock project with Charles Watson from Slow Club, as new band The Surfing Magazines, or their ongoing partnership with ex-Herman Dune member Stanley Brinks, or the very close partnership with Billy Childish for 2015’s Great Big Flamingo Burning Moon.

They first experimented with recording an album all in one go, straight to tape with 2016’s acoustic A Season In Hull. They took the concept further with Brushes With Happiness, making sure that it was a magical album that was completely improvised, with no songs written in advance echoing the jazz and blues recordings that they admire.

They formed in early 2020, but then the pandemic hit, so in order to write music, they had to send voice notes back and forth with the instruments they had to hand – guitars, bags of nuts, microwaves…

In summer 2020 they managed to briefly come together to record what they’d written remotely, producing their debut EP (releasing late 2021).

Their releases to date have been described as having a “winningly original sound” and like “trying to stage a modern dance show in a bouncy castle”.

Their tracks have been played on 6 Music by Steve Lamacq and Tom Robinson (“gobsmackingly good”), featured on Spotify’s editorial ‘Fresh Finds’ playlist, and have received support from Chris Moyles on Radio X, Frank Turner and BBC Introducing.