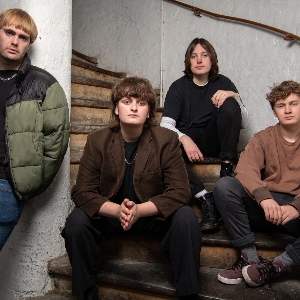 The Zangwills formed in May 2017, Jake Vickers, Ed Dowling and Sam Davies met at sixth form college in Northwich and the line-up was completed by drummer Adam Spence from Chester.

Each of them bring very different influences and this, along with Jake's unique voice, is reflected in their distinctive sound which is instantly recognisable as The Zangwills. Described as being, ?Like nothing else out there, an immensely valuable quality when so many bands disappear into a slurry of sameness' - by Getintothis.

They are a charismatic band who's unusual, youthful vibe and energy sets them apart and have gained a reputation for their strong live sets. They have a growing army of followers who seem to be prepared to travel in significant numbers to watch them play live and can somehow already sing along to the lyrics even before the tracks are released. Their last Manchester headline date in September 2019 sold out a month in advance.

?The Zangwills took the stage by storm' - Gigsandtours
?These are dead, dead, DEAD good!' - Adam Walton, BBC Introducing
?You are immediately drawn in from the start of the set' - Northern Alive
?The Horrors of Sobriety can reasonably be described as a true banger' - Halfway 2 Nowhere?

?A young band with a lot of talent' - The Pentatonic
?The Zangwills have smashed it' - Popped Music
?Next up, the bloody wonderful @thezangwillsuk' - Sound City
https://thezangwills.com