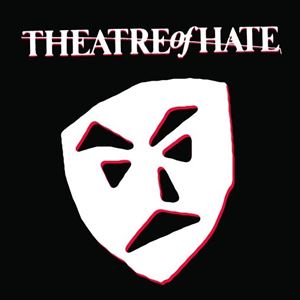 All Theatre Of Hate Live performances
Have tickets to sell? – Find out more

Theatre Of Hate celebrate 40 years with a return to The Georgian Theatre in Stockton. A venue that has become a second home to Kirk Brandon in recent years and the scene several of exhilerating live performances.

Support comes from a local band making a name for themselves on the Teesside scene. Benefits are a band to watch out for.

In 1980, Kirk Brandon formed Theatre Of Hate from the ashes of heralded punk band The Pack. Joining Kirk on vocals were notable punk musicians Stan Stammers and Luke Rendall, along with old school friend, Steve Guthrie and Canadian born John “Boy” Lennard, who revolutionised the band’s sound with his haunting sax lines.

Theatre Of Hate’s debut double-A-side single, “Legion”/”Original Sin”, topped the independent chart in 1980, and “Westworld”, their debut album, produced by Mick Jones from The Clash and released in 1982, held the number one position for 21 weeks. The single taken from the album, “Do You Believe In The Westworld?” has become an anthem and is still widely played in clubs and on international radio, as well as featuring on numerous compilation albums.

Supporting the likes of The Clash & Ian Dury lead to Theatre Of Hate headlining major venues across the UK & Northern Europe.

Theatre Of Hate imploded in 1982, with Kirk taking Stan forward to form Spear Of Destiny, but the band has resurfaced over the years to play some very special shows.

40 years on the band continue to thrive with popularity greater than ever, sell out live shows, festival appearances and newly recorded music featuring along side the the Theatre of Hate classics