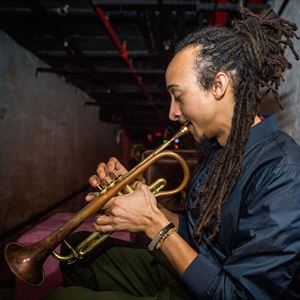 All Theo Croker performances
Have tickets to sell? – Find out more

We are honoured to invite a true leading light of the new generation of US Jazz, Theo Croker.

Star People Nation is trumpeter, producer, arranger, songwriter and multi-
instrumentalist Croker's most personal project yet, something he describes as an intimate exploration of "the everyday rituals of blackness" and is already garnering widespread acclaim in the UK from the likes of Gilles Peterson.

Grandson of the late venerable trumpeter Doc Cheatham, and former student of legendary jazz trumpeter Donald Byrd, Theo Croker stands firmly at the helm of a scene with many parallels to that in the UK; taught by the greats, yet unafraid to step in bold new directions.

Croker has also lent his talents to the world of hip hop, with rap superstar J. Cole's platinum-certified No. 1 opus 4 Your Eyez Only, with Croker acting as trumpet arranger and performer on multiple tracks. GRAMMY® Award-winning rapper Common also sought out Croker for his critically-acclaimed album Black America Again.