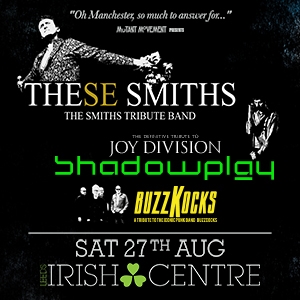 Fan-to-Fan Resale Tickets
Manchester Lesser Free Trade Hall, 4th June 1976, every Mancunian of the day swears they were there to see the Sex Pistols. It has been said the show changed music forever, the Northern contingent came away inspired. But they were inspired in a very Mancunian kind of way, it was so important as an event, a moment in musical history and as a myth.
Not because of the songs the Pistols played – essentially a few cover versions and a smattering of originals – but because of the effect they had on those who were there. The Sex Pistols themselves are, in many ways, the least interesting aspect of the story.
What’s fascinating is to think of a world without the Lesser Free Trade Hall audience. A world without Peter Hook’s basslines, Pete Shelley’s winsome punk heartaches, Morrissey’s uplifting brand of misery and Factory Records’ self-destructive, creative madness.
"That was the day the punk rock atom was split, no doubt about it," says Steve Diggle of Buzzcocks. He was there on 4 June. Of course he was. "It was amazing to see. That’s where it exploded from, it changed Manchester and it changed the world."
Mutant Movement brings you a night, celebrating that era with three of the UK’s best tribute bands. The event will last a whopping 6 hours, ending with a DJ set until 1am to compliment the 3 bands as well as the music they were inspired by.
These Smiths are the UK’s best tribute to The Smiths. The band are from The Smiths’ home city of Manchester. Formed shortly after their lead singer appeared on the UK television show Stars In Their Eyes, they are renowned as the closest sounding tribute to the real thing. A must see for fans of The Smiths and Morrissey. Performing songs from both Morrissey’s solo career and with Johnny Marr & co., heaven knows you won’t be miserable by deciding to choose this tribute to take you out tonight!
Shadowplay, with lead singer Bastien Marshal, will have you questioning whether you’re actually watching Ian Curtis front Joy Division. His band Detachments had Peter Hook of Joy Division and New Order join them onstage playing bass for Salford Foundation Trust - Tony Wilson Awards leading to the release of the Fade EP on Hacienda Records in 2012. Since then, Hook chose Bastien as vocalist for the Joy Division Orchestrated: Dreams EP and at their shows at such prestigious venues as London’s Royal Albert Hall and the Sydney Opera House.
Buzzkocks are the only tribute to Devoto & Shelley’s most influential Punk band from the North, the Buzzcocks, they bring back that energy packed sound with a blistering set of early classics and many more.
Tickets £15 from the Irish Centre or +b.f. from the following outlets, M.O.T.D.
Eventbrite
SeeTickets
Crash Records
Jumbo Records
These Smiths – https://www.facebook.com/TheseSmiths
Shadowplay – https://www.facebook.com/JDShadowplay/
Buzzkocks - https://www.facebook.com/Buzzkocks
Mutant Movement – https://www.facebook.com/DJMutantMovement
Leeds Irish Centre - https://www.facebook.com/leedsirishcentre
In the event of this night being rescheduled or cancelled, the choice of keeping tickets for a future date or a refund would be offered, otherwise your purchase is non-refundable