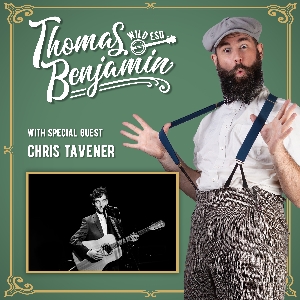 Thomas Benjamin Wild Esq takes inspiration from the wit and wisdom of the songwriters of the early-mid 20th century and combines them with punk rock sensibilities to create pithy songs full of catchy tunes and social and political commentary that speak volumes about the times we live in.

The video for his sweary anthem ‘I’ve No More F***s To Give’ has been viewed over 11 million times on YouTube alone, and his debut album ‘Awkward Encounters While Walking My Dog’ reached number 3 in the Billboard Comedy Album Chart in 2019. He has since released 2 more albums, which include favourites such ’Pants Drunk,’ ‘Stop Being An Arsehole’ and ‘Well, This Is Sh*t.’ Expect sharp, vintage style, plenty of laughter and raucous audience participation

Jangly-guitar rock and a biting sense of humour meet in the satirical stylings of Chris Tavener. A deft lyricist with an acerbic wit, Tavener writes his storytelling songs from the perspective of flawed characters that he draws from 21st century life.

His cynical social commentary, dressed in punchy, guitar-driven rock and acoustic ballads has won him acclaim from BBC 6 Music and multiple BBC Introducing stations. He’s popular for his unique and theatrical live performance that has seen him sharing the stage with Super Hans, Emily Capell, Tony Hadley and Peter Hook of Joy Division while also writing songs for the likes of Sir Ian McKellen.

”An interesting lad with an elastic turn of phrase” – Steve Lamacq, BBC 6 Music